Abstract:
Soybean is an important food and cash crop in Uganda. Despite its importance, soybean production is highly affected by ever-changing biotic and abiotic stresses. The main objective of this study was to enhance soybean production and productivity through the use of adapted and diverse soybean germplasm in Uganda. The first study was specifically carried out to determine the degree of genetic diversity that existed among advanced elite soybean genotypes and released varieties. The study was carried out at Makerere University Agricultural Research Institute Kabanyolo (MUARIK) screen house and Biotechnology Laboratory. Thirty-four genotypes used in this study comprised of 23 advanced elite soybean genotypes and 11 released varieties. Thirtyone SSR markers were screened and only 21 showed polymorphism and were used for the study. A total of 59 alleles with an average of 2.85 alleles per locus were detected among the genotypes. The number of alleles varied from 2 (Satt126, Sat_409, Satt717, BE806308, Satt185, Satt264 and Sat_084) to 4 (Satt216, Satt431 and Satt411). The PIC values ranged from 0.208 on BE806308 to 0.741 on Satt411 with an average of 0.5870. Observed heterozygosity varied from 0.000 to 0.088 with an average of 0.010, while the expected heterozygosity ranged from 0.208 on BE806308 to 0.725 on Satt411, with an average of 0.548. Cluster analysis was performed and all the 34 genotypes were grouped into three major clusters, CI, CII and CIII with the results indicating that almost all released varieties belonged to cluster I. The principle coordinate analysis explained 28.9% of the total variation in which the PCo1 and PCo2 accounted for 17.2% and 11.7% of the total variation, respectively in discriminating between the released varieties and elite soybean genotypes. All the 21 markers used successfully distinguished advanced elite soybean genotypes and released varieties and showed the existence of moderate genetic variation among genotypes. The presence of moderate genetic variation is not much favorable in soybean breeding since there are dynamic pests, diseases and abiotic stresses which can accelerate vulnerability of closely related cultivars to outbreak of pests, diseases and abiotic stresses. Therefore, inclusion of more diverse germplasm and use of landraces in the soybean breeding programmme may provide the level of genetic variation necessary to cope with dynamic pests, diseases and abiotic stresses of Uganda. The second study was specifically carried out to evaluate the yield, protein and oil content stability of advanced elite soybean lines across diverse environments. The experiment was xi conducted at six locations namely; On-station (Kabanyolo), TVC (Iki-Iki and Nakabango) ZARDIs (Ngetta, Abi and Bulindi). Twenty-three advanced elite soybean genotypes and two commercial varieties used as checks were evaluated in a randomized complete block design (RCBD) replicated three times. Combined analysis of variance over locations and seasons was carried out for grain yield, protein and oil (%) content. The results for grain yield showed significant (p<0.05) differences for all the sources of variation except genotypes × season, interaction which was non-significant. The results for protein and oil content (%) showed nonsignificance (p>0.05) for all the sources of variation except location which was significant (p<0.05). The AMMI and GGE stability models were carried out for grain yield to determine wide and specific adapted genotypes. AMMI and GGE biplots explained 68% and 65.74% of the total interaction sum of squares, respectively and identified winning genotypes in each mega- environment as follows; BSPS 48A-28 for mega-environment I (Bulindi, Nakabango and Kabanyolo), BSPS 48A-28-1 for mega-environment II (Iki-Iki), Bulindi 18.4B for megaenvironment III (Ngetta) and BSPS 48A-24-1 for mega-environment IV (Abi). Based on mean yield and stability performances, Maksoy 3N was the most stable genotype while BSPS 48A-28 was the highest yielding genotype with moderate stability. In conclusion, the study observed moderate genetic variation among the soybean genotypes evaluated. BSPS 48A-28 outperformed the released varieties (Maksoy 3N and Maksoy 4N) that were included in the evaluation trial. Superior and widely adapted genotypes like BSPS 48A-28 should be submitted for tests of novelty, distinctiveness, uniformity and stability (DUS) by the Ministry of Agriculture Animal Industries Department of the National Seed Certification Service. No need to test for protein and oil content on multi-location, since there was non-significant G × E interaction for those traits.
Language:
English
Date of publication:
2019
Country:
Uganda
Region Focus:
East Africa
Author/Editor(s):
Mukuze, Clever
Collection:
RUFORUM Theses and Dissertations
Agris Subject Categories:
Agricultural research
Plant genetics and breeding 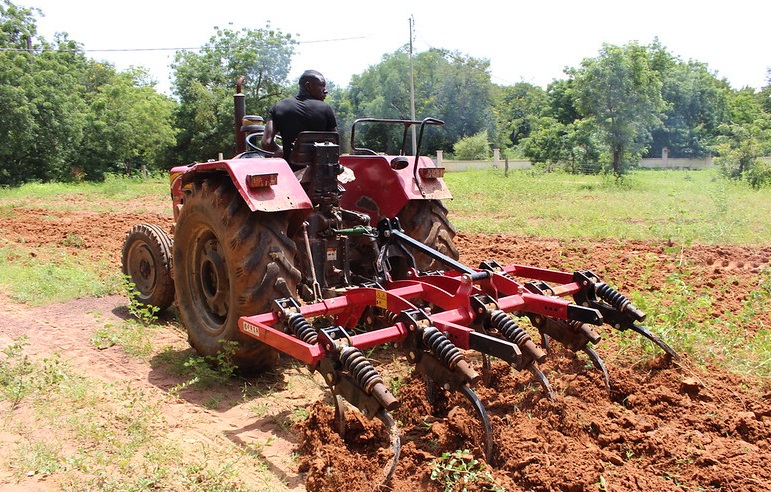